After the birth of his son, George Richard, Terry grows up some. He takes notice of his responsibility. He rents a larger apartment at street level. He surprises Nellie with the news; she is overjoyed. No more stairs to climb up and down with the baby. What a relief. Family members visit them to see the new addition to the family.

Peg visits nearly daily either before or after work, helping out when and where she can. Peg is so proud of her nephew, George Richard. (Nellie names him after her Pa, George) “Such a formal name for such a little guy,” Peg tells him. “I think I am going to call you Dickie, she continues. “Your granddad’s name is David; everyone calls him Dick. He’ll be here tomorrow. It will thrill him to know at least his nickname is being carried on. “ (There is an obvious unspoken resentment rising up here because the first born is named after Nellie’s Pa instead of Terry’s Dad) She holds Dickie (George) up so he can see her and says, “I am your Auntie! My name is Aunt Peg,” she hesitates momentarily, “Well,” she continues, “You can call me Aunt or Auntie Peggy, little man. But I am going to call you Dickie.”

Nellie remains quiet. Nellie believes,  “There is no sense in stirring up a hornet’s nest.”

“Nellie,” Peg says changing the subject abruptly, “Don and I are thinking of going our separate ways. He wants to settle down. I don’t. He wants kids. I can’t. He says we can adopt, but I don’t want to.” She says. “Don’s got his bags packed. He will be heading back to Texas and if his old girl friend is still single.” She continues, “He is going to hook up with her when our divorce is final. That is okay by me. We will still remain friends forever.”

(Don is packed and ready to return to Texas)

“Nellie, I figure you can have the kids for both of us. I get them on holidays and vacations. You get them the rest of the time. How does that sound?”

“Someone’s at the door, Nellie. I bet it is my dad; he is always early. Don’t bother to get up. I’ll answer it for you,” Peg says.

Peg goes to the door. Sure enough, it is her Dad.

“I hear I am a Grandfather,” he says as soon as the door opens. “It is about time. I was beginning to wonder if I’d be getting any of those. Good work, Nellie. Where is my grandson?”

Nellie wonders, “What kind of family have I married into?”

Thinking to herself, “Ma and Pa only be married to each other. When they marry, it is till death do them part.” She wonders why it is not the same for everyone else. “When I marry, I say vows. I mean what I say. I expect my husband mean what he say – in sickness, in health, till death do us part.”

Peg now be losing her second husband, willingly. Her Dad and her Ma both go their separate ways. Betty is her Dad’s girlfriend. Peg’s Ma is going to marry again. What am I to think of this? Perhaps, it is not my place to wonder. I can hear my children someday asking: ‘Why do I have so many grandmas and grandpas?’”

“I don’t want to have to answer that question.” She says.

“I am home.” Ted announces when he comes in the door. “I’ve got good news,” he says as he tosses his hat over the hat rack; it spins on the hook, but stays.  “Nellie, I got a new job.”

“The streetcar line,” he adds. “It pays better than I am getting laying bricks. And it is much easier on my back.” He stands back a ways so Nellie can get a full view and then asks, “How you like my uniform?”

“The uniform looks good on ya. Ya gots ya own change handler too. I likes ya cap ya throws over there,” Nellie says. “You’re a handsome man, Terry,” She adds. “Just don’t let dat comment go to ya head.”

Other things are weighing heavy on Nellie’s mind right now. She thinks she is again pregnant. George (Dickie) is going on seven months; having another baby so soon after his birth is not the best thing for Nellie; her body has yet to heal from the first.  As a family, they are just getting their feet on the ground. Terry’s new job will help a lot with the upcoming extra expenses, if her suspicions turn out to be correct. She can’t share her thoughts until she is for sure.

Nellie cooks dinner for everyone; they share a meal. And then the company excuse themselves. Granddad and Betty stay at Peg and Don’s for the night; they will be back on the road in the morning. They are heading in the same direction as Don; they decide to caravan their trip to help each other out if need be. They leave to go to Peg and Don’s first . Peg says, “I will follow shortly. First, I have some news I must share with Nellie and Terry.”

Peg says, ”I’ll be breaking up housekeeping for a while. I’ll be bringing over some things I can’t carry with me”. She says, “I’ll be getting down to one or two suitcases. I took a job with Greyhound.” She explains, “I pass the driving test. I’ll be driving their big Greyhound bus across the U.S.A. I am so excited.” 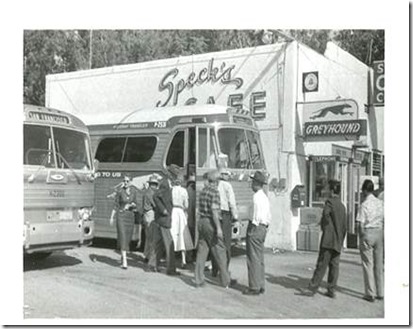 “When I am on this side of the country, I will be dropping in to visit,” she says. “I’ll bring over what furniture we have. You can use some,” she adds. “I’ll send some pictures of me in my uniform when I am on the road.” She reaches over and gives Nellie a hug and kisses Dickie on the cheek, “See you brother,’’ she says to Terry. “Goodbye.”

Peg spends a day moving over her excess for Nellie to use. She makes it down to the two suitcases. She will be taking those with her on the bus. She leaves her car at their house. Peg hands Nellie the keys telling her, “You can use my car at your discretion, but I get it back when I come to visit.”

A few weeks pass. The mailman drops a letter through the letter slot on the front door. It is from Peg. Nellie rushes to open it. She didn’t send a letter, just a few pictures.

(Peg on the road with Greyhound) 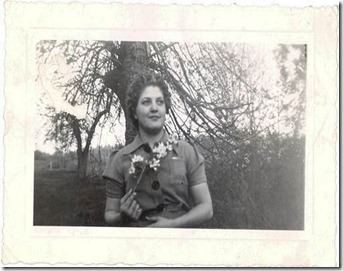 (Peg on the road with Greyhound)

She is looking good.

In the meantime, Terry starts a spending spree. Instead of buying groceries and paying some household expenses with his first new paycheck, he splurges and rewards himself with a complete set of expensive golf clubs, bag, and all the little extra things that look good but you don’t really need.

The game itself is expensive to play if you do not earn that much. And the expense of the game takes away from the family expenses which by all rights should take priority. Terry doesn’t think that way. In Terry’s mind, he comes first. Nellies must make do and do her best with what is left. Golfing is his avenue of escape; his only pleasure. After all, he stops drinking. He leaves other women alone. He likes to let Nellie believe he is doing this on his own. But in actuality, he doesn’t want to go to jail as the Judge promises him he will do if he does not straighten up and fly straight (if you know what I mean). He figures if he spends one day a week on golfing that will be okay. Nellie knows how to pinch the pennies. She can make do with what she is given; she always has. Now is no different. That is what Terry tells himself. That is the way Terry thinks.

A letter came from Don. He makes it back to Texas okay. He finds his old girlfriend. He sends his love and a picture of him and his girl.

He says to be sure and tells Peg, “As soon as the divorce is final, I am marrying her and we are going to start making us a family. If Peg’s Greyhound bus ever comes up this way and lays over, tell her to be sure and stop and visit, if she can.” 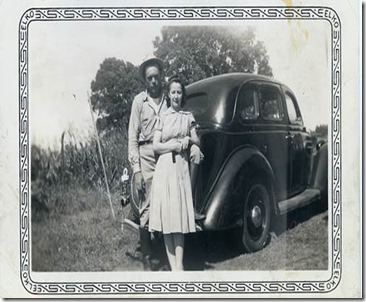 (Don and his soon to be wife)